May 15, 2019
So my laptop packed up over the weekend, and that gave me the opportunity to actually walk the walk rather than just talking about Windows Virtual Desktop and Azure, actually drinking our own champagne.
Hence for the last couple of days I have been using my own Windows 10 VDI that is in Azure delivered via Windows Virtual Desktop, and in fact I am writing this post form that very Virtual Machine.


I created a little video of this whole user experience.


So first off I have an Azure subscription - in to that subscription I have provisioned a Windows Virtual Desktop hostpool (see the document links at the end for deployment guidance).
A hostpool is a collection of similar VM's hosting a set desktop or set of applications for the in scope group of users.

In my case to make my demo's slightly less boring I have chosen an N-Series VM from Azure which have Tesla M60 GPU cards within the hosts. This allows me to run some graphical applications that look interesting rather that standard apps. It also demonstrates the power and flexibility of Azure as even the largest VM in Azure takes around five minutes to deploy and users can thus be up running and productive in significantly reduced amounts of time compared to doing this on-premises.

To make things slightly more interesting I was using a Samsung Galaxy S10e mobile phone running Samsung Dex. DeX allows you to connect your mobile phone via an HDMI cable to a monitor or TV, and launch a full desktop like experience. In that desktop you can launch any apps that run on the phone which is great of itself.

However the real power comes about when you connect to your VDI session running in Azure. The Samsung DeX supports both the Microsoft Remote Desktop Client and Citrix Workspace. I have my VM running in Windows Virtual Desktop in Azure, I also have a number of other VM's in Azure being orchestrated by Citrix Cloud that I could equally, easily connect to. So in essence I am using a device that I always have with me no matter where I am and at anytime - as a thin client allowing me to connect into my corporate VDI session to use my line of business apps and data.

Once on the VDI the user experience is very good, with no noticeable delay and as I am typing this blog there has been no pauses or delays to every character appearing as I type them. The actual experience is indistinguishable from having a full local device. This is particularly impressive seeing as I am located in the UK and I am accessing my VM that is located in our South Central US Azure region which is nearly 5000 miles away.

Now if you have worked in this space you may well remember two other devices that did the same thing - definitely in the past tense! The first was the Motorola Atrix, which required a dock to place the phone into and also connect cables to for the monitor, keyboard and mouse. Whilst it was pretty small it was still too clunky to carry around. This meant that the dock was left on the desk. This in turn meant that whilst the mobile phone was a mobile device - accessing your VDI from that device required you to be back at your desk, which worked fine but tied you to that desk, so you weren't able to be fully mobile and productive. 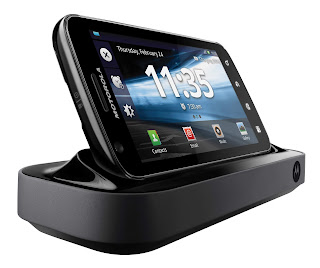 Following later Microsoft released a device called Continuum which was an improvement on the Atrix but still suffered the same issue of people not wanting to carry the hardware device around with them. 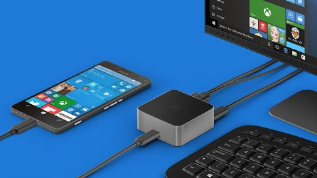 Whereas the Samsung Dex requirement is just one HDMI cable, which is about the same size as a USB charging cable and thus no problem to put in a bag and carry around. This means that you can be fully mobile and able to connect into your VDI session anywhere at any time - you just need to have a monitor or TV available. 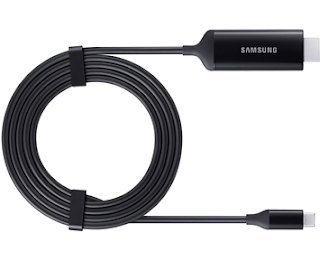 Now you do also need a Bluetooth keyboard and mouse, but i'm sure everyone who carries a laptop also carries a Bluetooth mouse, and it takes all of about 20 seconds to connect a mouse to the phone, so people could quite easily carry the one mouse and connect to their phone when needed. Plus you need a Bluetooth keyboard of which their is a plethora of them about. But in terms of size Microsoft have a Universal folding keyboard that is so small anyone can chuck it into their work bag.

What this results in, is that all I need to carry around is the phone that I would have with me anyway, a mouse that I always have in my bag, an additional cable which is nothing and this small keyboard. My bag doesn't notice the difference. 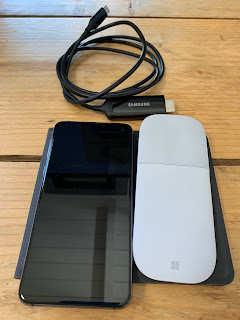 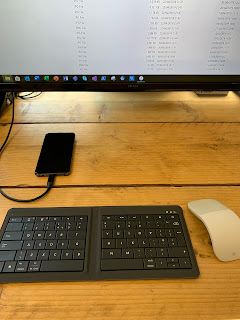 Another nice feature is that the phone application will launch over the top of the VDI session allowing you to handle the call, and if you answer defaults into speaker mode so you don't need to pick it up 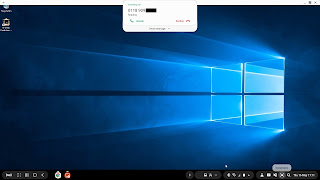 Whilst you get a larger window if you are back in the DeX desktop application: 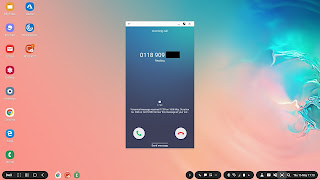 The other item that is worth noting is the price. In my case I picked an N-Series VM which is one of the more expensive VM's due to the nVidia Tesla M60 GPU within the host.
The specific VM is an NV6 in the South Central US Azure region. The NV6 VM has six vcpu's, 56GB of RAM and the one M60 GPU.

With three years Reserved Instances and Azure Hybrid Use Benefits applied the VM costs £0.4523 per hour to run. But this VM should support up to 36 "light" users, which gives a price per user per hour of just £0.013p.

As mentioned the N-Series are quite bespoke for specific workloads and probably not all that common in VDI environments. The D series VM's are better for this workload. The generally recommended VM for multi-session Windows 10 VM's is the D8s_V3. This VM has 8 vcpu's and 32 GB of RAM and again with three years Reserved Instances and Azure Hybrid Use Benefits applied the VM costs £0.1346/hour in the South Central US Region. This VM supports 48 "light" users which gives a price per user per hour of just £0.0028.

Pricing for these is listed here in the context of Windows Virtual Desktop providing typical scenarios: https://azure.microsoft.com/en-us/pricing/details/virtual-desktop/

To get started in the Windows Virtual Desktop preview you can follow this documentation:  https://docs.microsoft.com/en-us/azure/virtual-desktop/overview