Citrix have finally released the much anticipated XenDesktop 7, the co-joined XenDesktop and XenApp products into the one combined solution.
Below are the generic installation instructions and yes it can be done in 20 minutes if you already have spent the time lining up all your ducks in terms of information and pre-requisites

Here is a list of some of the top new features in XenDesktop 7.

Installing your Site on your first XenDesktop 7 Controller

1. Run AutoSelect.exe and install any pre-requisites that are not yet installed to enable the installer to start. 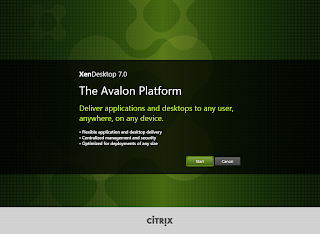 Citrix’s next version of XenApp and XenDesktop codenamed Avalon Excalibur has been in Tech Preview for a number of months now. Recently at Synergy it has been finally announced that XenDesktop 7 will be released in June or July 2013.


Here is a brief summary of some of the changes I have noticed by being part of the Citrix High Engagement Beta program, between previous versions of XenApp and XenDesktop, and new features you can expect to see. This is by no means an exhaustive list just some of the items that stood out to me - feel free to comment on any you think should be added.


·         There is no traditional XenApp Install for Worker Group Servers. This has been replaced with just a simple VDA install. There are two types of VDA, Desktop and Server OS. But essentially the same install (There are some differences in the type of ICA stack that gets installed single for desktop OS' and multi-user for server OS's - naturally) . but the installs are nearly identical and both are Version 7.